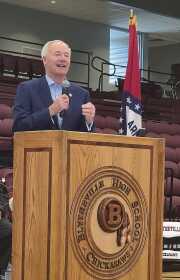 The battle against COVID-19 hesitancy continued July 13 as Governor Asa Hutchinson visited Chickasaw Arena to discuss the importance of being vaccinated and to understand why some are still uncertain about it.

He also confirmed that over 57 percent of new Covid cases in the state are from the Delta variant, which is twice as likely to cause hospitalization.

With low vaccination rates across the state, and one variant already making an impact, Hutchinson detailed the urgency of getting more people vaccinated.

“School is starting one month from now,” Hutchinson said. “We had a good school year last year with many challenges. And we’re going to have a good school year coming up. But an ingredient in doing so is increasing the vaccination rate. With the Delta variant out there, if our teachers, staff and students don't have a higher rate, we’ll have more challenges. The variant is gaining ground and this is an urgent situation because the solution is available.”

Arkansas Secretary of Health Dr. Jose Romero was also in attendance and confirmed that the current vaccines are capable and effective in battling Covid and the Delta variant. However, if vaccine rates remain the same, the virus will be able to mutate even more.

“Everytime it spreads it has a chance to mutate,” Romero said. “At this time, we’re capable of tackling the virus and the variants that exist, but it’s up to us to take the vaccine. There is a theoretical possibility in the future that [the current vaccine could be ineffective against other variants]. But we can stop it from doing that here in our country by having the majority of us take the vaccine.”

For those who have already contracted the virus before, antibodies are developed by the immune system. However, Romero stated that those antibodies can not be relied on as a substitute for being vaccinated.

To further highlight the intense nature of COVID-19 and its variants, Hutchinson presented the increased number of cases in the past month. On June 7, the state confirmed 1,594 active cases. Yesterday the active case count reached over 7,000.

“The solution is available," Hutchinson said. “The key to success is not what the government is doing, it's individual action and community action.”

“We eradicated [smallpox], we don’t die from that anymore,” Pirtle said. “The science is real and this disease is real.”

Vaccines were available on-site at Chicksawa Arena and remain available throughout the county at local pharmacies and hospitals as well as places like Walmart and Walgreens.