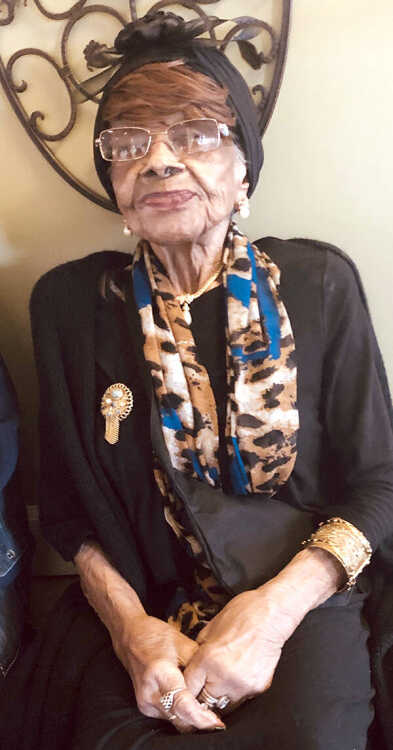 Ada Bell was in her early teens when she came to Number Nine to live with her father and family. Ada Bell was blessed with a brother and three sisters, Orangett Ewing (deceased), Aubrey “Brother” Ewing Cross (deceased), Alice Ewing Bowers of Michigan and Clara Freddye Ewing Ross of New Hampshire.

In 1977 she began working for Robin and Don Houseworth. She was a very loyal person that took care of the house and the children, Sherry Morgenson Houseworth (Jim) of Sacramento, Calif., Debbie Houseworth Howell (Jamie) of Oxford, Miss., Molly Houseworth Jackson (Sam) of Blytheville and Abby Houseworth Whitener (Robert) of Blytheville. She was part of their extended family and came to the house every day for 41 years. In December 2016 she became a spunky resident at StoneBridge Assisted Living.

Ada Bell was a devoted member of the Bethlehem Temple Church, at 1800 West McHaney in Blytheville, led by Bishop R.L. Jones, Sr. for over 20 years. She was a very religious person and cherished her time at the church with the entire congregation. God has showered Ada Bell with his blessings because she was kind, giving, caring, and good to those who knew her.

In 2008, Susie and Brian Zimmerman purchased Ada Bell's home on Walnut Street to develop the first-ever outdoor, public, 24 hour, interdenominational Prayer Garden in Blytheville in honor of Mary and Tommy Sylvester. The Prayer Garden is made up of a series of seven gardens surrounding the outdoor Chapel of Praise. After the first phase of construction was completed in 2019, the first memorial, granite bench was etched and placed in the garden in honor of Ada Bell. It was a special time for Ada Bell as that was the same year she turned 100 years old.

Special thanks to the StoneBridge staff and nurses for their attentive care, friendship, and patience and The Houseworth and Family for the caring support. We welcome everyone to attend the Memorial service on her birthday, Saturday, April 10, 2021, at 3 p.m. at the Blytheville Prayer Garden.