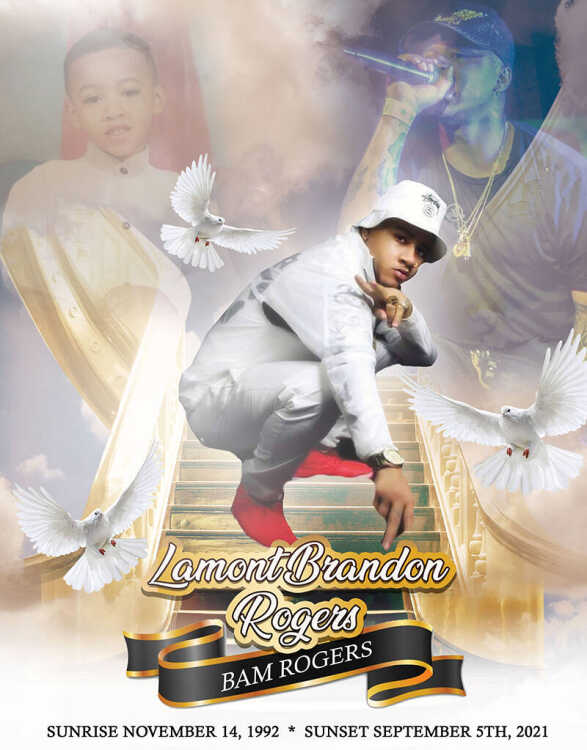 Lamont Brandon Rogers was born on Nov. 14, 1992, in Blytheville to his parents, Margaree Rogers Jones and John Benjamin McDaniel. Lamont graduated from Blytheville High School in the class of 2011 where he was well known as a young man that loved to smile and keep a smile on everyone's face. He confessed hope in Christ at an early age under the leadership of Bishop T.J Rogers. He was a member of the Prince of Peace Church, Pastor Tim Rogers. Lamont was a successful business entrepreneur who was fearless to step out on nothing and believe that something was there.

He was a global inspiring musical artist who was a master in his craft. Lamont was a young prodigy and well-known superstar who inspired young and old audiences and uplifted those who heard his music. Everyone who knew Bam Rogers was eager to react and share his music with the world. Bam Rogers started in Blytheville and later moved to Houston, Texas, where he was introduced to numerous artists and performed on large platforms. Bam began working in the music industry when he was 13 recording his first song with GLP. When he was 17 years old, he was a winner on BET 106 & Park as well as going on tour with numerous artists. He was a writer, producer, and extraordinary singer. Bam Rogers was featured on Sirius XM Radio's Hip Hop Nation and many other musical outlets. Lamont enjoyed writing and performing his music and loved being with his family and friends. Bam Rogers was a teenage rapper and singer, a young rapper who had already published a plethora of tracks, including Work It Out, Wake You Up, Give It Up, Hate me now, Patience, Nobody Else's, Flip It Again, Never Be The Same and many more. He is known for his smooth harmonic melodies and lyrically rap sound. His music energized his listeners and motivated them to live life to the fullest.