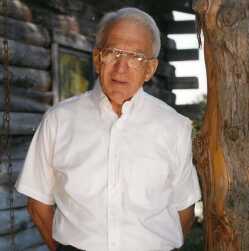 James Leroy Southard, known as Buck to his family and Jim to the community and his customers, passed away Saturday, February 13, 2021 at his home.

Jim was born in the family home in the old Airbase area. He was the first born of eight children of Elmer and Emma Vaughn Southard. Jim loved God and was a lifelong member of Gosnell Baptist Church.

Over the years he handed out thousands of welcoming bulletins at the entrance of the church. He always loved the opportunity to visit with people. Jim was married to Patsy Ann McCormick Southard for 66 years. Together they built the log house that they lived in for 39 years. Jim loved his family and they loved him.

He was the rock of the Southard family and was always there for them anytime they needed him. Jim taught his family the true meaning of “Live, laugh and love”, and also taught them and others the importance of honesty, integrity, hard work, respect and responsibility. Jim’s children say they were extremely blessed to have such wonderful parents all of their lives.

Jim was a quiet giver within the community and there is no telling how many bicycles he purchased over the years to give to churches for children that needed a special gift at Christmas. He also helped others in need and most had no idea that he was the one giving. Jim never needed accolades for his deeds.

Jim owned and operated The Red Ball Barber Shop for 46 years, 6 months and 6 days. He got quite an education in the Barber Shop. Jim would always ask his customers how to repair something and go home and fix whatever it was he needed to repair. He would always bring home some interesting stories but would hold to his promise and would not tell his family who told him the juicy gossip! Jim served on the Gosnell School Board for 15 years and was always so supportive of the school district. He was an active supporter of community politics. Even campaigning candidates would go by the Red Ball Barber Shop for an updated poll on where they stood in the election. They would always get an honest answer! Jim was given the key to the City of Gosnell in April of 2018 and that was something he was most proud of! Aside from being a barber, Jim was a homebuilder and remodeler. He built several homes in the Blytheville and Gosnell area, and helped many people establish their new home. Jim was also an antique car enthusiast, doing all the work on his cars himself with advice from his customers.

Jim wanted to thank the City of Gosnell Employees and Police Department as they have all been so helpful and supportive over the years. God Bless you all!

The Southard family would like to thank everyone for all of the prayers and support through Jim’s life and especially over the last year.

Jim told his family that he just wanted to be remembered as a good old Christian boy!

He was preceded in death by his parents; brother, Carl Southard; sister, Ruby Thames; and grandson, Joshua Blake Southard.

A memorial service will be held Sunday, February 21st at 2:00 p.m. in the Cobb Funeral Home Chapel with Dr. Terri Brassfield and Dr. Eddie Clemons officiating. The family will receive friends Saturday evening from 4:00 p.m. until 7:00 p.m. at Cobb Funeral Home.

The family requests that any memorials be made to the Blytheville-Gosnell Food Pantry or H.I.S. Ministries.

Following the State of Arkansas COVID-19 guidelines, no more than 80 people will be allowed to gather inside of Cobb Funeral Home and practice social distancing, keeping a 6-foot distance between one another.

Face masks are required to enter the building and to be worn at all times. Condolences may be expressed to the family at www.cobbfuneralhome.com.