By Marcus McClain | Special to the NEA Town Courier 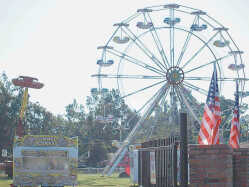 During the Blytheville City Council committee meetings on Thursday it was announced that an 89-year tradition is coming to an end this year.

Parks and Activities director, Cody Wyatt, said the Arkansas Department of Health did not see fit to hold the Mississippi County Fair in Walker Park this year because of the COVID-19 pandemic.

As of Sept.2, Arkansas’s total coronavirus cases reached 62,112 and resulted in 841 deaths as reported by Blytheville Mayor James Sanders. The county’s total cases sits at 1,388 since the virus’s outbreak with 104 of those still active.

However, the potential to improve Walker Park for the future has been presented by the National Fitness Campaign. Blytheville was selected by this campaign to receive a $30,000 grant to build fitness courts containing several different stations.

This campaign would also train ambassadors locally at no cost to the city so workout classes could also be held at these fitness courts.

If approved and installed, the fitness courts would be free for the public to use.

“We would be saving money because we don't have to pour a concrete slab and do any surfacing things because we want to repurpose our tennis courts into more than just tennis,” Wyatt said.

Still, the total cost of this addition to Walker Park would be $130,000. The various fitness courts installed around the country mainly make up the difference through sponsorships from local businesses, making the cost $0 to the city, which Wyatt said is her goal.

Questions of preservation and maintenance for the fitness courts arose from councilman Matt Perrin.

“If we did go forward with this, who’s responsible for the upkeep?” Perrin said. “I assume that would end up being an annual cost to the city.”

Wyatt responded that all equipment comes with a warranty and is also wrapped, making it easier to be cleaned if it was to be spray painted for example.

With the council just recently being informed of Blytheville’s selection for the grant by the National Fitness Campaign prior to the meeting, they decided to leave it on the table so everyone could take a deeper look and discuss action further next week.

The Parks and Recreation Committee and the city council have 60 days to officially accept the grant.

The council also discussed the potential of advancing code enforcement to help urge business owners and citizens to take pride in the city’s appearance.

“I would even be in favor of giving code enforcement two more full-time employees because as great of a job as the city is doing, we want to stop having to condemn houses,” councilman Perrin said. “And the way we do that is by having code enforcement out in the neighborhoods all the time, citing the little things so they don't turn into big things.”

They also discussed the possibility of focusing one of those new positions to just businesses and improving the property owners downtown.

“Since COVID started we’ve been sending a few citations to court but not near as many as we normally would,” assistant police chief Ricky Jefferson said. “It’s hard to get people in court right now, but as soon as this is over we’re going to be wide open and issuing a bunch of citations. We try to work with people, give a notice, send them a letter, but if that doesn't work we have to give them a citation.”