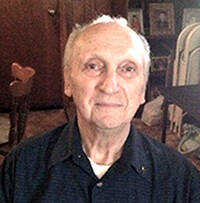 Jack was born in Hiram, Mo., to James F. and Maggie Hovis York. Jack was a barber for 60 years and attended Gosnell Baptist Church. His mother Maggie called him “Jack” because she had to call on him to repair things around her house. He could fix or make anything and was truly a “jack of all trades”. Therefore, the name “Jack” stuck with him. Jack served his country with honor in the United States Army during the Korean War. He enjoyed hunting and fishing, and spending time with his grandchildren.

Funeral services will be 2 p.m. Thursday, Aug. 27, in the Cobb Funeral Home Chapel with Dr. Eddie Clemons and Doug Stacy officiating. Burial will follow in Elmwood Cemetery. The family will receive friends from 1 p.m. until service time at Cobb Funeral Home. Following the State of Arkansas COVID-19 guidelines, no more than 100 people will be allowed to gather inside of Cobb Funeral Home at one time and practice social distancing, keeping a 6-foot distance between one another. Face masks are required to enter the building. Condolences may be expressed to the family at www.cobbfuneralhome.com.