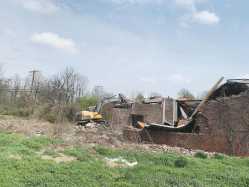 On Friday, Goolsby crews began the demolition of the old “Ice House” on West Main in Blytheville.

“Goolsby’s began the demolition/clean up process on Friday, March 27, 2020 from the rear end of the building,” said Janice L. Erby-Smith of Blytheville Code Enforcement. “They were planning to get the majority of it down today (Monday), but as you all may know, Jonesboro took a major hit on Saturday. Unfortunately, Mr. Harold Goolsby Jr.’s (excavator operator) home was one of many that was destroyed during this disaster. So, as a result of this, the demolition for the Ice House will continue at a later date. Once we are provided with the date, I’ll be sure to pass it on to you all. Let’s keep Jonesboro and all of the families in prayer during this time.”

Blytheville city attorney Chris Brown called the demolition of dilapidated structure “a sight for sore eyes and a testament to the City of Blytheville that your government is still working for you.”

“When I was appointed city attorney a little over three years ago, one of the main things the Blytheville City Council asked me to focus on was the removal of blight and abandoned houses,” Brown said. “I can’t tell you how many times I’ve been asked, ‘When will the old ice house be torn down?’ Thanks to the hard work of Mayor (James) Sanders, our code enforcement staff, our assistant city attorney Jessica Thomason, and a city council that has financially put us in a position to do this, we are finally seeing the fruits of our labor and I couldn’t be happier. This certainly isn’t the end but it’s a ray of sunlight in a time that we need it. Just with the amount of buildings we have removed in the past few months, it has made a huge difference in the community. On that same note, I look forward to the city’s partnership with the Chamber of Commerce in implementing a proactive quadrant approach in continuing to clean up our city and I look forward to seeing many more buildings removed.”