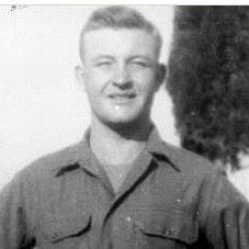 Herschell "Bo" Besharse of Mesquite, Texas, passed away June 4, 2018, at the age of 94. He was born and spent his early years in Blytheville at the center of the cotton belt in northeast Arkansas. Herschell was born to James Monroe and Cora Besharse on December 30, 1923, and grew up with a sister, Edna May, and 4 brothers: Herman, Homer, Howard and Monroe. This was really a second family for James and Cora as they had lost four of their six children in the worldwide influenza epidemic of 1917 and 1918. His siblings all lived long lives but preceded Herschell in death. During his early years Herschell became a highly developed athlete, succeeding in football, basketball and track and field events. This led to his life-long interest in sports and love of football. His athleticism was still on full display to his children and grandchildren as he was still able to run 100 yards in just over ten seconds in his early 30's and could walk on his hands, to the delight of his grandchildren, in his early 50's. After many years of farm life during the Great Depression, Herschell joined the Army without completing high school and participated in the tank corps during the African, European and Middle Eastern Campaign of World War II. He and three of his brothers served in the military as a part of what has become known as the "greatest generation." After the war he developed a business in construction and plastering in Blytheville and eventually completed his education with a GED degree. Seeing better economic opportunities for his family Herschell moved to Dallas, in 1963, during a construction boom and developed a successful construction business there. He lived the remainder of his life in Texas but made many return visits to his beloved childhood home. Herschell had a long interest in honeybee farming from his childhood years, and as he grew older he bought a farm in east Texas and developed a highly successful honey production and bee keeping business called "Bo's Honey" in Rockwall, Texas. He happily ran this business, more like a hobby, well into his retirement years. His passion for beekeeping was nearly equaled by fishing and hunting, which he passed on to some of his children.

Herschell married June Elizabeth Bush from Hickman, Kentucky, in 1949. They began their life together with a large family of five children from their previous marriages, and went on to have two additional daughters, Diane and Susan, during the 1950's. After more than 50 years of marriage, June Elizabeth passed away in 2000. Herschell spent the last years of his long life with Joyce Vaughn of Mesquite, his fellow beekeeper and constant companion, who became more like a second mother to some of the children. Three of his children, Tommy Besharse, David Wagenhurst and Sharron Phillips, preceded Herschell in death. He is survived by four children: Joseph C. Besharse of Milwaukee, Herschell Besharse, Jr., of Dallas, Susan Besharse Johanson of Hudson, Colorado, and Diane Curran of Rockwall. He is also survived by 15 grandchildren.