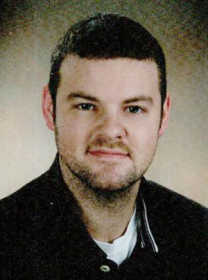 Mr. Robert Doyle (Bo) DeSpain Jr., 28, went to be with the Lord Wednesday, June 11, 2014, at his home in Paragould. Bo was born Oct. 24, 1985, in Blytheville to Robert and Angie DeSpain Sr. He was a graduate and a valedictorian of Gosnell High School and Arkansas State University. He worked as a Registered Nurse at Arkansas Methodist Medical Center in Paragould, for the past seven years. He was an excellent ICU nurse.

Bo accepted Jesus as his Lord and Savior at church camp when he was a young child. He was a member of Westview Baptist Church in Paragould. He loved reading and especially enjoyed studying his Bible.

Bo enjoyed working out, but he also like to watch TV. Playing with his puppy, Mollie, was one of his favorite pastimes. His nieces, Addison and Emerson, and his nephew, Jackson, were a joy to him.

He was a great family man, a loving husband, son, brother, and uncle. He loved his parents-in-law as he did his parents.

He was preceded in death by his Paternal grandmother, Juanita DeSpain of Blytheville.

He is survived by his wife, Cassie Russell DeSpain, of Paragould;

His parents, Robert and Angie DeSpain of Gosnell;

His sisters, Rendi (and Bobby) Mitchell of Paragould and Melissa Halsell of Gosnell;

His nieces Addison and Emerson Mitchelll and nephew Jackson Mitchell; and

His parents-in-law, Donnie and Brenda Russell of Paragould.

Funeral services will be held at 2 p.m. Saturday, June 14, 2014, at Mitchell Funeral Home in Paragould.

Visitation will be Saturday from noon until service time.

Burial will be in Manila City Cemetery.

The family requests that memorials be made to St. Jude's Children Hospital in Memphis.

Carney Funeral Home in Blytheville is in charge of arrangements. Condolences may be offered at www.carneyfuneralhome.com