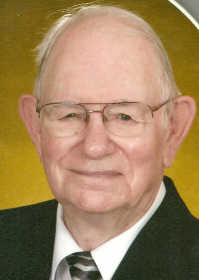 Mr. Wilburn Grant Lovelady, 87, of Leachville, passed from this life, Sunday, April 15, 2012, at St. Bernards Medical Center in Jonesboro. A lifelong Leachville resident, he was the son of the late Rufus and Marie Roberts Lovelady and a 1944 graduate of Leachville High School. He was a U. S. Navy Veteran of World War II and a longtime member and Deacon of the Leachville First Baptist Church. Mr. Lovelady was a longtime employee of the Arkansas-Missouri Power Company and later retired as the manager of Associated Natural Gas Company in Leachville. He was a former Leachville city councilman and served many years on the Leachville volunteer fire department.

He leaves his wife of 64 years, Mary Wilda Stewart Lovelady of the home;

One son and daughter-in-law, Ronnie and Marsha Lovelady of Dexter, Mo.;

One daughter and son-in-law, Karen and Stan Simpkins of Paragould;

Funeral services will be held at 11 a.m. Wednesday at the First Baptist Church in Leachville with the Rev. David Price officiating. Burial will follow in Leachville Cemetery under the direction of Howard Funeral Service of Leachville. The family will receive visitors from 6-8 p.m. today at the funeral home. A guest register is available at www.HowardFuneralService.com