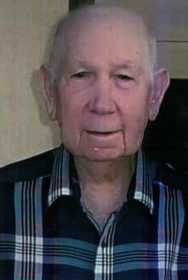 Mr. Earl Vester Griffin, 90, of Blytheville, passed away Saturday, December 16, 2017 at the Flo and Phil Jones Hospice House in Jonesboro.

Earl was born in Lepanto, Arkansas to James and Esther (Culberson) Griffin. After his father’s death at an early age, he was raised by his step-father, Rev. William Clayton “Preacher” Cotton. Earl was a sanitation engineer for the City of Blytheville for many years before retiring. He was a member of Heartland Pentecostal Church of God and a member of the American Legion. Earl served his country honorably in the United States Army. He loved to play the guitar, play dominos, and read. He also loved people and talking with them, and going to church. He was always waiting to win the Publisher’s Clearing House Sweepstakes.

He was preceded in death by his wife, Evalean Griffin; his parents; two brothers; and three sisters.

Funeral services will be held Thursday, December 21 at 2:00 p.m. in the Cobb Funeral Home Chapel with Pastor John Wofford officiating. Burial will follow in Dogwood Cemetery. The family will receive friends from 12:30 p.m. until service time at Cobb Funeral Home. Condolences may be expressed to the family at www.cobbfuneralhome.com.