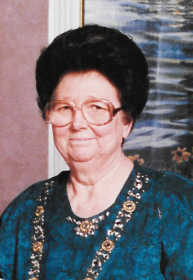 Nina Louise Malloy, 87, of Manila, widow of Freeman Junior "F.J." Malloy, passed from this life Monday, June 19, 2017, at the Flo and Phil Jones Hospice House in Jonesboro. Born in the Blackwater Community, she was the daughter of the late William T. "Bill" and Bessie Grymes Franks. She had been a lifelong Manila area resident and was a 1946 graduate of Blackwater High School. She was a past member of the Business and Professional Women's Club in Manila and had worked for Leachville State Bank, Merchants and Planters Bank and Southbank in Manila. She was a longtime member of the Church of God of Prophecy and attended the First Baptist Church in Manila.

In addition to her parents and husband, she was preceded in death by her son, Steve Malloy.

Funeral services will be at 11 a.m. Saturday, June 24, at the Howard Funeral Service Chapel in Manila with Dr. Matt Pryor officiating. Burial will follow in Manila Cemetery.

The family will receive visitors from 6-8 p.m. Friday at the funeral home.