BFD responds to fire at BMS 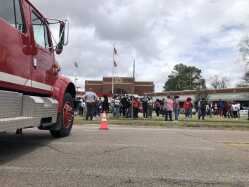 The Blytheville Fire Department responded to Blytheville Middle School around noon Wednesday after smoke was reported.

According to Blytheville superintendent Bobby Ashley, BMS had to evacuate the building, after a fire in the upstairs bathroom of the main building.

“It was a soap dispenser that was on fire causing a lot of black smoke so they have evacuated the building and sent the kids home for the day,” Ashley said. “We will make a decision about tomorrow later today.”

Fire crews removed the smoke. No injuries have been reported.

Fire chief Mike Carney said the smoke alarm went off at 11:56 a.m. Wednesday, and firemen noticed smoke in the men's bathroom on the second floor, extinguishing it with a school fire extinguisher.

Carney reported heavy smoke throughout the hallway, and he said students were evacuated in a timely manner. There was moderate fire damage and some smoke damage, Carney said. The fire is under investigation.