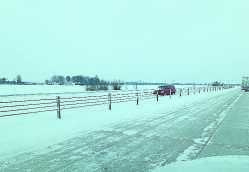 A vehicle is stuck on Interstate 55, near the 63 exit, Thursday.

Jefferson noted the Entergy representative was waiting on the order, which did not come.

He said the power company agreed to give the city a 30-minute notice before the blackout.

Entergy sent the following release on Wednesday night: “This message is for customers in the Blytheville area: Because of the extremely cold temperatures, demand for electricity is exceeding supply. To maintain the safety and stability of the power grid, we were notified by our grid operator, MISO, to begin power outages in your area immediately. The duration of these outages will vary, but it could be for several hours. To the extent possible we will rotate outages circuit-to-circuit throughout the targeted area until the event is over. If you lose power for any reason, please switch off any major electrical appliances, especially electrical heating units, then turn them on gradually over the hour or so after power has been restored. This will help avoid overloading the lines with a sudden surge in demand when re-energized. We apologize for the inconvenience. We are working to repair damages and restore our system to normal grid operations as soon as possible.”

Meanwhile, as of 8:45 a.m., Thursday, Jefferson said even the heavily traveled roads such as I-55 and the local highways were still ice-covered and difficult to drive on, adding overpasses and elevated surfaces are particularly slick.

He said the side streets in the city are difficult to travel and implored residents to stay off the streets if possible.

Jefferson pointed out the light at Byrum Road and South Division has turned into a four-way stop for the time being but other traffic lights are functioning properly.

Thursday morning, the Blytheville Police Department posted the following on its Facebook page, "The City received significant additional snowfall overnight. Low clearance sedan and small suvs, even all wheel drive vehicles, are getting stuck in deep snow. If you have concerns about anyone's welfare and have not been able to make contact, please contact the Police Department at 860-763-4411 and we will do our best to make a welfare check on them."

South Division is shown Thursday in this video from the BPD.