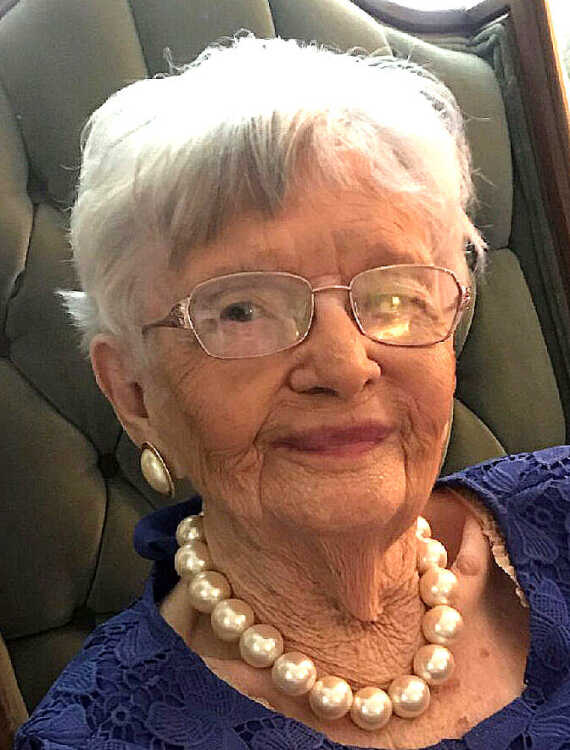 Clementine “Tina” Love, 98, of Jonesboro, passed away Dec. 17, 2020, at the Flo and Phil Jones Hospice House in Jonesboro with her daughter by her side. Tina lived on a small farm near Dell Township with her parents, Dewey and Pearl Sheppard. She often said, “We were poor, but I didn’t know it." After her Dell graduation, she attended Arkansas State College for one year, before marrying W.L. Welborn. They had two daughters, LaMartha Griggs, now deceased, and Winifred Keahey of Spanish Fort, Ala.

Clementine was a leader and participant in all things - community, school, and the Dell United Methodist Church. Whether she was president of the PTA, Sunday school teacher, or a gypsy in a booth at the fall festival, she could be depended upon to do a great job. She enjoyed playing bridge with her friends.

After the death of “Doc”, Tina began to travel. She was introduced to Samuel Love of Denver by Paul and Eddie Whistle. They married and traveled 27 countries. Samuel died in 1991. Tina moved to Village on the Green in Jonesboro. Golf and the garden club were her favorite activities. Around age 80, walking became difficult for Tina. She started using a scooter to get around the neighborhood. She was always accompanied by her dog, “Babe”. Tina was called the sheriff after confronting a daytime burglar. Family and friends called her a confidant. Her memory for details amazed everybody.

Tina was preceded in death by her parents; her sister, Valina Knight and husband, William; daughter, LaMartha; and sons-in-law, Bill Griggs and Frank Kealey.

Due to COVID restrictions, a memorial service will be announced at a later date, under the direction of Emerson Funeral Home. To sign an online guestbook, go to emersonfuneralhome.com.