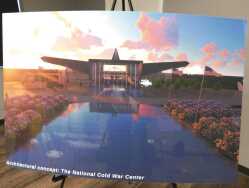 “Eaker Air Force Base played a key role in the defense of our nation during the Cold War—we ought to preserve its legacy and encourage the continued education of future generations. Our bill will officially recognize the museum in Blytheville as the nation’s National Cold War Center, which will help preserve this important history and be a boon to local tourism,” said Cotton.

“The Blytheville Air Force Base exhibition is dedicated to sharing the stories and educating the public about the community’s role in our national security. I’m proud to honor the accomplishments of the men and women who served at Eaker Air Force Base by recognizing the museum as the National Cold War Center so we can pay tribute to their contributions to our defense,” Boozman said.

The world’s largest and most comprehensive museum about the Cold War is in production in Blytheville.

Eaker Air Force Base, the site of the museum, was home to approximately 300,000 men and women from 1942-1992 and is America’s best preserved Strategic Air Command Alert Aircrew Facility and Nuclear Weapons Storage Area.