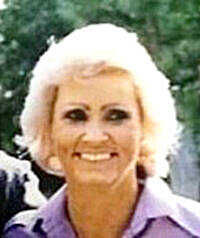 Peggy Sue Reinhart, 76, of Paragould, died early Saturday, Dec. 12, 2020, at St. Bernards Medical Center in Jonesboro. Born in Dell, she was the daughter of the late Willard and Mary Schultz Keeling and had been a longtime Paragould resident. Peggy retired from the L.A. Darling Company in 2006. Having been a cancer survivor she was very involved in the Greene County Relay for Life and served as the co-captain of her team, "We Are Family." Along with her brothers and sisters, "We Are Family" raised more than $250,000 for the American Cancer Society. Peggy loved her family, being outdoors, and working in her flower gardens. She was of the Baptist faith. In addition to her parents she was preceded in death by one son, Jerry Reinhart; infant brother, Willard Linley Keeling, Jr.; and her companion of 26 years, C.L. Cline.

The family received visitors Tuesday from 6-8 p.m. at the Howard Funeral Service Chapel in Manila. There will be a private family funeral service with Rev. Jerry Pentecost and Tracey Wade Reinhart, II officiating. Pallbearers will be Adam Blake Reinhart, Tracey Wade Reinhart, II, Zachary John Reinhart, Caleb Luke Reinhart, Ethan James Reinhart and John May. Honorary pallbearers will include Gunner Bolar and Michael Grimes. In compliance with the state's directive regarding Covid-19, face masks will be required inside the funeral home and social distancing is requested at all times. Friends may sign the online guest register at www.HowardFuneralService.com.