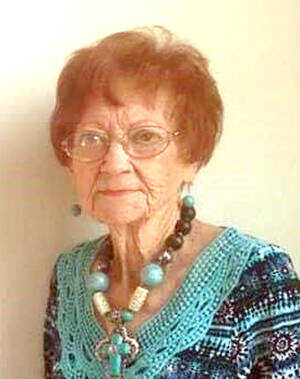 Shirley Joan (Cutshaw) Alt died Saturday, Sept. 26, 2020, in Blytheville. Shirley was born in Hutchinson, Kan., to Robert Leo Cutshaw and Rev. Iva J. (O’Neal) Cutshaw. She was a graduate of Uintah High School in Vernal, Utah, in 1954, where she was involved with the Future Homemakers of America, the Pep Club, and the Senior Hop Committee.

Upon graduation, she attended both cosmetology and business school in Salt Lake City, Utah. It’s at this time she met a serviceman at a U.S. Air Force base in Ogden, Utah. Shirley Joan married Harold Alt and became Shirley Alt on June 18, 1955.

Shortly after their marriage, he received orders to Blytheville Air Force Base. Shirley filled her days by working for Pete Thompson at City Drug Store. More than 20 years later, retirement brought them back to Blytheville where Shirley worked at Dons Auto Supply and Hancock Fabrics.

Shirley was an avid and accomplished seamstress. Through life she clothed her school age children in the height of homemade fashion, her adult daughters in hand and heart sewn wedding gowns, and later, clothed her church in elaborate banners that still hang today. She was the thread, woven through the fabric of her family, that held them together.

Shirley’s life purpose was ministering to others. Sharing the love of Christ was her greatest passion; her legacy and mission.

In addition to being a daughter of Christ, she was a mother and natural homemaker to three beloved children. Shirley was many things, only a few of which there is space enough to name: a den mother, a full-service seamstress, an intuitive gardener, and a skilled crafter.

Her love of gardening blossomed every year outside her living room window. Her toil and efforts paid off when she was awarded “Yard of the Month” by the Blytheville Garden Club. Being a born and bred Kansas girl, her love of sunflowers was evident both inside the home and out, as her blooms often reached heights of eight feet or more.

She delivered food for the Blytheville Food Pantry, she was a member of the St Stephens Episcopal Church Alter Guild, sang in the church choir, and was an integral part of the Near the Cross Community.

She was known to her family as a spunky redhead who will be deeply missed.

Shirley is preceded in death by her parents, her brother Jerry Cutshaw, and grandson Jarrod Pinegar.

Funeral services will be held Wednesday, Sept. 30, at 3 p.m. at St. St. Stephens Episcopal Church in Blytheville, with visitation at the church beginning at 2 p.m. Officiating the service will be Rev. Katherine Wren, Rev. Marilyn Webb and Rev. Herschel Richardson. In lieu of flowers, memorials can be made to Near the Cross, c/o Lisa Redding 272 CR 841 Caraway, AR 72419. Following the State of Arkansas COVID-19 guidelines, no more than 100 people will be allowed to gather inside of the church and practice social distancing, keeping a 6-foot distance between one another. Face masks are required to enter the building. Condolences may be expressed to the family at www.cobbfuneralhome.com.