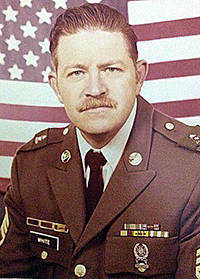 He proudly served in the United States Army where he retired as SSG Gary White. He went on to later work and retire from Tyson Foods where he worked as a security officer. He was a member of Trinity Baptist Church in Marked Tree.

“I am an American fighting man, I believe in the American way of life. I am prepared to give my life in their defense against all enemies foreign or domestic until the day I die - SSG Gary Michael White, U.S. Army Retired”

Memorial services will be held Thursday, June 18, at 3 p.m. at Trinity Baptist Church located at 784 Highway 75 East in Marked Tree.

Graveside services will be held Friday, June 19, at 1 p.m. in Dardanelle at Brearley Cemetery.