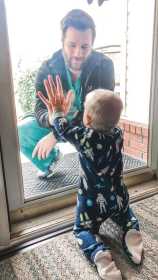 Doctors and nurses are on the front lines as the world battles the coronavirus pandemic and their families are right there with them.

Manila natives Jared Burks, a UAMS Northeast Resident Physician working at St. Bernards in Jonesboro, and his wife, Alyssa Tate Burks, made the decision to distance themselves to keep their son, 13-month old Zeke, from potentially being exposed to the virus. Alyssa and Zeke went to stay with her parents, Bobby and Penny Tate, in Manila while Dr. Burks continued working.

Dr. Burks, son of Lynn and Karen Burks of Manila, is specializing in family practice. The couple returned to Northeast Arkansas from Little Rock in May 2019. 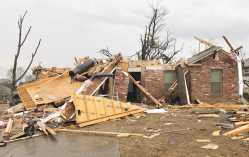 Jared graduated from Manila High School in 2010 and Alyssa in 2011.

Alyssa took a picture of Jared and Zeke with hands together on either side of a glass door. She put the picture on Facebook and it was shared and went viral.

The family had been living apart for two weeks when the tornado came through Jonesboro March 28 destroying their home.

Alyssa and Jared were on the phone and she told him she was watching a tornado heading to Jonesboro and told him to go to a safe spot in the house. They were deliberating on the safest area in the house when the phone went down.

“I received an alarm informing me glass was breaking on our back door so I knew our house had been hit,” Alyssa said. “Jared called back in probably five minutes but it was the longest five minutes of my life. I hated to hear our house was destroyed but to know he was okay was all that mattered.”

The photo of Jared and Zeke brought more attention to the loss of their home which was covered by CNN, ABC, NBC, USA Today and other national media sources.

Alyssa’s friend, Evan Clower, set up a Go-Fund-Me account with a goal of $2,500 to help. Donations started pouring in from all over the world and over $100,000 was given. Her friend Sara Stallings and Roots in Manila had fundraisers for them, also. Alyssa said it has been amazing and overwhelming. She said they want to spread the attention to others who are in the same situation and they do want to pay it forward.

“We have been blessed beyond measure,” Alyssa said. “This will allow us to start over and help others.”

They are presently staying with her parents but hope to be able to find a home in Jonesboro soon.

Their future plans are to remain in Northeast Arkansas near their families.