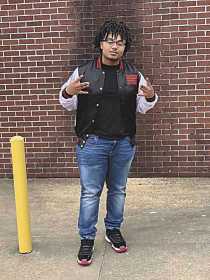 Wells is accused in the slaying of 19-year-old Tadarius Daniels Friday in the 300 block of Walls Street in Blytheville.

Daniels was shot in the head and his right hand.

Jacob King suffered non-life-threatening injuries in the incident — a gunshot wound on his right arm.

Accompanied by his attorney, Zach Morrison of the Rees Law Firm of Jonesboro, Wells, who has no criminal history, surrendered to Sheriff Dale Cook at the Mississippi County Detention Center Monday morning.

On Friday, officers of the Blytheville Police Department responded to the Great River Medical Center in reference to two individuals who had been shot.

"Upon arrival at the hospital officers contacted one victim who was injured with non-life-threatening injuries (Jacob King), and one individual who was deceased," said Capt. John Frazier, who is the BPD Criminal Investigations Division commander. "The decedent was identified as 19-year-old Tadarius Daniels. Officers located a crime scene in the 300 block of Walls St. This case is being investigated as a homicide. The evidence in this case suggests that the crime was not a random act and may have been the result of a narcotics transaction that went bad."

According to the court synopsis, when police arrived at the Great River Medical Center emergency room Friday, officers noticed a gray Mercury Grand Marquis parked in front of the ER doors.

“The vehicle had a large amount of blood on the outside, as well as the inside of the vehicle, as well as bone fragments,” the report reads.

King, who was the driver of the vehicle, told police that Daniels had asked him for a ride and they drove to the Walls and Franklin area, meeting an unknown male who was wearing a black hoodie, according to the report.

King said the male opened the car door and spoke to them and then they turned the car around to travel eastbound.

“At that time, Tadarius Daniels leaned out the passenger side window, and spoke to the same male,” the report reads. “He (King) stated that he heard Tadarius Daniels ask the male why he was acting strange, and then heard gunshots. He (King) stated that he then observed that Tadarius Daniels had been shot. He (King) stated that he then left the area, traveling eastbound on Walls Street, toward Ruddle Road, turning onto Ruddle Road traveling to Great River Medical Center. It should be noted that this is the same account which was told by the witness, in a separate interview. It should also be noted that this witness was outside while this was occurring and observed the male be positively identified as being Carlos Wells, Jr. speaking with the occupants of the victim’s vehicle prior to the shooting.”

The report said the witness was working in his yard in the area of Walls and Lilly and he noticed the suspect, who wearing a maroon letterman jacket, walking on Walls toward Lilly. The witness had not seen the suspect before that day.

The witness said a Mercury Grand Marquis drove up to the suspect and then drove away.

The witness said after the vehicle drove away, he saw the suspect walk away and meet up with another male who was behind a fence beside the witness’s property on Lilly Street south of Walls Street.

The witness said both males got into a Dodge Charger and drove toward Sawyer, turning eastbound, away from the area.

The report said in a photo lineup, the witness positively identified Wells as the male he saw speaking with the two victims.

Wells’ bond was set at $250,000 on Tuesday. He is charged with first-degree murder and battery.