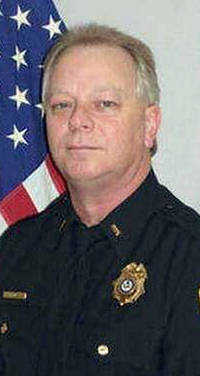 David Flora, 63, passed away peacefully Wednesday, Jan. 8, 2020, with family by his side at St. Bernards Medical Center in Jonesboro.

David was born in Dayton, Ohio, to Albert and Gloria Gibson Flora and was a member of Gosnell Baptist Church. David was an avid gun collector who enjoyed restoring and repairing old guns. He enjoyed watching old westerns, listening to rock music, working outdoors, playing golf, and most of all, spending time with his family.

David served his country with honor in the United States Air Force during the Vietnam Era. David found his calling in life and became an officer with the Blytheville Police Department. He took great pride in protecting and serving those in his community. David loved law enforcement and retired from Blytheville Police Department as a captain in 2009. Upon retirement, he and his family moved to Rockaway Beach, Mo., where he served as the chief of police for five years. After his service in Rockaway, David moved back to Blytheville where he worked for Arkansas Probation and Parole. At the time of his death, David was employed at M&D Outfitters.

He was preceded in death by his parents; and one sister, Barbara Flora.

David leaves his wife of 36 years, Sandra Bratton Flora of the home; four children, David Flora and his wife Linda of Shawnee, Okla., Dustin Flora of Shawnee, Okla., Brandee Craine of Blytheville and Shellee Robinson and her husband Brandon of Blytheville; nine grandchildren, Darien, Lauryn, Zoey, Benjamin, Isabella, Jonah, Keith and Kash; and one great-granddaughter, Teagan; and one sister, Deborah Flora Cooper, of Texas, all of whom he loved and adored.

A casual Gathering of Friends to celebrate David’s life will be held Monday, Jan. 13, at 11 a.m. at Gosnell Baptist Church with Dr. Eddie Clemons officiating. There will be no visitation. In lieu of flowers, the family requests memorials be made to Gosnell Baptist Church or the charity of your choice. Condolences may be expressed to the family at www.cobbfuneralhome.com.