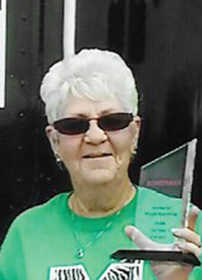 Margie Lea Knowlton, 72, of Searcy, former longtime Manila resident, passed from this life Thursday, Oct. 11, 2018, at Unity Health Medical Center in Searcy. Born in Maynard, she was the daughter of the late Cleo and Flora Greer Knowlton and was raised in Manila. She had lived several years in St. Louis, Mo., and Washington state before settling in Searcy in 2007. Margie was the former owner/operator of TDC Trucking and later retired from Bowerman Trucking in Searcy after 35 years as a long haul truck driver. She was known by many by her CB radio handle, Half-pint. She enjoyed gardening, working in her yard and cooking. Margie cherished the time she was able to spend with her great-grandchildren since her retirement in 2017. She was of the Baptist faith.

In addition to her parents she was preceded in death by a son, Tracy Dace, two brothers and five sisters.

Funeral service will be at 2 p.m. Monday, Oct. 15, at the Howard Funeral Service Chapel in Manila with Rev. Jeff Knowlton officiating. Burial will follow in Manila Cemetery. The family will receive visitors Monday from 12:30 p.m. until service time.