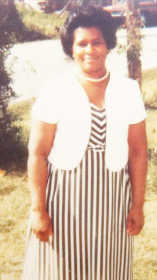 Mae Lee Peoples Moore, 83 of Blytheville went home to be with the Lord on Tuesday, September 11, 2018 at her home. Born January 23, 1935 in Magnolia, Arkansas Mae was the daughter of Albert and Vera Lee Snell Peoples.

She moved from Magnolia to Blytheville around 1948 and was a member of Progressive Missionary Baptist Church where she sang in the Choir.

The family will receive friends from 11:00 a.m. until 1:00pm prior to the funeral service.

Funeral services for Mae Lee Peoples Moore will be conducted on Saturday, September 22, 2018 at 1:00 p.m. at First Missionary Baptist Church, 600 East McHaney Street, Blytheville where Reverend Odell Jones is the pastor. Reverend Anthony Burton will deliver the eulogy and burial will follow at Memory Gardens Cemetery.

McDonald-Horne Funeral Directors are in charge of services and arrangements.