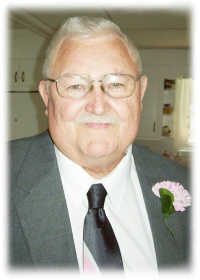 Earnest "Sonny" Hamm, Jr. was born in Tomato, Arkansas on December 2, 1937; the son of the late Earnest Odell and Mary Elizabeth Council Hamm.

On August 31, 1958 he was united in marriage to Linda Faye Driver, who survives.

Mr. Hamm served his country in the United States Army from 1954 to 1962. He retired as Sergeant for the Mississippi County, Arkansas Sheriff Department after 22 years. Sonny, as he was known by everyone, got his CDL and drove 18 wheelers for 10 years after he retired from the Sheriff's Department. He also started Hamm's Refrigeration in Arkansas and was still called for repairs into his 70's. In his spare time Sonny enjoyed fishing, hunting and camping. He also enjoyed creating desserts on Saturday nights and taking them to the hospital staff where Linda was working.

In addition to his wife, Linda, of 59 years, Sonny is survived by his two daughters, Suzie Hamm (Sean Moulton) and Sharon Reeves (Clyde), all of Savannah, Tennessee; and one daughter in law, Ginger Manie of Memphis, Tennessee.

He was preceded in death by his parents, one son, James (Jimmy) Eldon Hamm and one brother, Charles Alvin Hamm.

Memorial Services was held on August 4, 2018 at 11:00 AM at River Heights Pentecostal Church in Crump, Tennessee, with Michael Gibbs and Scott Stout officiating.