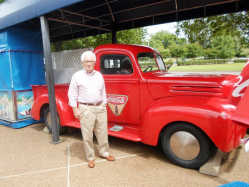 Charles (Sonny) Stromire, 87, of Houston, Texas passed away February 15, 2018. He was born in Gosnell, Arkansas to Charles and Ora Mae Gean Stromire.

In addition to his parents, he was preceded in death by his grandson, Scott Stromire.

He was a member of Gosnell Baptist Church before joining the First Baptist Church in Blytheville. Sonny moved his Trucking Business to Houston in 1981 and there he met his wife of 35 years. They enjoyed traveling in their motorhome, attending rallies and making many friends along the way. They were blessed with a wonderful life together.

Love you Honey and you will be missed by all.

Please visit www.blair-stubbs.com to sign the guest book or leave a message of condolence.