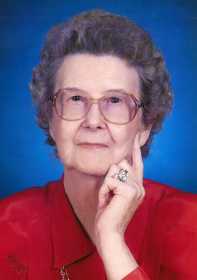 Nella was born in Calhoun City, Mississippi to William and Clara (Harrelson) Simpson. She was the secretary-treasurer for Lee Land Company and a member of the First Baptist Church. Nella was the valedictorian of her senior class at Blackwater School in 1941, and graduated from Parrish Business College in Jonesboro. She was a member of Blytheville Women’s Club and the past state president of General Federation of Women’s Clubs. Nella served as a volunteer at the Great River Medical Center gift shop for years. She loved to crochet and knit, winning many ribbons at the fair for her work.

She was preceded in death by her husband, James Carr Lee; her parents; a son, John Allen Lee; and seven brothers and sisters.

Funeral services will be held at 2 p.m. on Friday, November 17 in the Cobb Funeral Home Chapel with Rev. Zach Roberts officiating. Burial will follow in Elmwood Cemetery. The family will receive friends from 1 p.m. until service time at Cobb Funeral Home. Condolences may be expressed to the family at www.cobbfuneralhome.com.