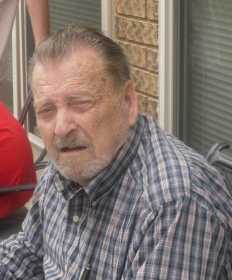 Mr. John Edward Meadows, Sr. passed away on August 26, 2017 at his home in Gosnell. He was born on July 3, 1933 in Blytheville to Jamies Earl Meadows and Edna Eiline Bowles Meadows. He was a licensed journeyman painter, specializing in commercial properties but also engaged in house painting.

Mr. Meadows was a cook while serving in the U.S. Navy and he continued to practice his cooking skills after leaving the Navy. His specialty was grilling, but he could cook anything and he could cook it GOOD! He even made his own barbeque sauce. One rule he had was: no one else in the kitchen!

He loved to fish, he enjoyed watching the Razorbacks and he spent many hours playing Slotomania on the computer. He played the lottery and often won, sometimes big money on the $5 tickets. He liked Fox News and he watched CNN news but violently disagreed with its content and he would become very angry at the newscasters.

A grandson said that he was the strongest man He’s ever known. His children said that he was stubborn, headstrong, and opinionated, but they also said that he was a great father. He was a teddy bear when it came to his grandchildren. They called him “Paw-Paw.” He enjoyed working, and his family had to make him stop when it became clear that he was no longer able.

In addition to his parents, he was preceded in death by his wife of 54 years, Mary Louise Meadows.

He is survived by his children, John Edward Meadows, Jr. (and Tanya) of Lake City, James Allen Meadows, Sr. (and Dee Anna) of Hughes Springs, Texas and Cynthia LuJenia Riley (and Michael) of Gosnell;

His dog, Ginger; and a host of nieces, nephews and cousins.

Condolences may be offered at www.carneyfuneralhome.com