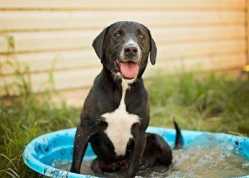 Ryder, one of the dogs at the Blytheville Humane Society

The Humane Society is alive and actively working. We say this because, this past week the Courier News reported on the Blytheville Animal Control Committee meeting where allegations were made that the Humane Society is not operating in the best interest of the animals and the community.

We want to take this opportunity to state the facts. The work we do as an organization is important to us and to you, and we want you, our supporters, to know that the Blytheville Humane Society Board of Directors, volunteers, and employees are operating legally and ethically.

In 2004 the city of Blytheville built a new animal shelter, at that time, the chairman of the board of directors for the Humane Society was on the city council, she entered into a “verbal agreement” with the city to build the City Animal Control Shelter on the same property where the Humane Society Shelter was being operated. As an organization we have operated since 2004 as if that “verbal agreement” was an ever-green agreement, meaning there is no end date. In 2012 after a new board of directors, and chairman of the board were elected, the Humane Society entered into a contract with the City of Blytheville, which did end in 2015. The City of Blytheville has not renewed or discussed the contract until this committee meeting.

The Humane society was accused of having animals in an office space, this is true, and since 2004 we have occupied the small white building that was built as an office space. The previous city animal control officer did not want to use the space, so the Humane Society converted the space into an office. Like most organizations that work with animals, we do occasionally house animals in the office. Animals that are preparing for adoption, transport, or who might have an emotional or medical need are housed in the office for special attention.

This office space does have the only working restroom on the property. Since 2004, that has not been an issue. We have been accused of not allowing the animal control officer to use the restroom. There is a lock on the back door, but it is never locked during business hours. The animal control officer freely comes and goes to talk with our staff, borrow vaccinations or medications. No one, in our organization knew there was an issue regarding the restroom until, the Courier News reporter asked about the issue. We promise the restroom is available to the public and to the staff (city or humane society).

There was also a concern about renovations to a small structure on the property that has previously been used as an apartment. In 2012 when the Humane Society as an organization took a path to become a no-kill shelter, as an organization we terminated the employee that lived in the apartment and hired an employee that shared our vision of a no-kill shelter. Over time we eventually terminated that employee and found the structure to be in need of repairs before someone could call it home. So, we have used the structure to house small dogs. Over time the shower, which was discussed in the Courier News article, started leaking, leading to black mold growing around the shower and the floor needing repair. So yes, we are renovating the structure, we did tear out the shower. As an organization we have built fences, outside structures, landscaped and not once has any of the upgrades we made to the property been questioned and honestly we have never had to ask permission for making repairs or upgrades.

We have asked in the past to have access the City Shelter only to assist with the cleaning and the care of the animals. But, we also respect the City’s decision to maintain a locked shelter.

In the Animal Control Committee meeting the accusation was made that the Humane City had tapped into a gas line that is paid for by the City of Blytheville, this is partially true. We have received a gas bill monthly. If anyone would like to donate to pay our gas bill monthly – that would be a blessing. What we have found after doing some investigation into the accusation, is that, prior to 2012 the previous Chairman of the Board / City Council Member did have the small office space and apartment hooked into the City’s gas line.

In the Animal Control Committee meeting there was also an accusation that the Humane Society does not care for the animals, we were accused of not having heat, air conditioning, or method to clean.

We assume that the accusation is about the former thrift store that has operated on the site from 2004 to 2016. Part of that building is not fit for person or animal. Those parts of the building have been shut-off and are not accessible. We are currently using one small room – that small room has a portable heat and air unit. We have a water hose that we use to clean the concrete floor. There is a doggie door for the small potty trained dogs to have access to a play yard. Dog beds are available for each dog. These beds are made in a manner that allows them to be cleaned.

There was also some accusation about how we feed the animals. Other than some of the animals we are currently caring for needing to be put on a “fat dog program” but all animals are fed daily, an appropriate diet. We purchase our food locally. Our feed bill is approximately $800 a month.

We do spay and neuter every pet that comes into our facility. We also provide vaccinations and worm medications. According to State law any animal that is rehomed from either a City Shelter or Humane Society, the animal must be spayed or neutered and receive a rabies vaccination prior to going to their new home (AR ac 20-19-103).

Since becoming a no-kill shelter, we have also become partners with Petco, PetSmart, Hollywood Feed, and the Paws-in-Prison program. Each of these organizations have toured and inspected our facilities. We have passed with flying colors.

We are not in direct competition with the city or the non-profit county shelter that has been proposed for the last five years. Lord knows there are enough unwanted animals in Blytheville and the surrounding county for an army of animal-lovers to stay busy for years to come.

What we do know is we are an asset to the community. For the year of 2016 we have transported 719 dogs (92 mothers and 627 puppies). These dogs went to Right Way Rescue. We have also, transported an additional 39 dogs to Mary’s Rescue in New Hampshire. These dogs have homes waiting on them at arrival. We have spayed or neutered 233 animals for local residents. We have adopted 114 dogs through Petco adoption days. Hollywood Feed allowed us to participate in their adoption days, finding homes for another 30 dogs. Local adoptions cat and dogs neared the 200 mark.

These statistics indicate what we do, as an organization, to improve Blytheville and the surrounding community. The animals that we transport, spay, neuter, or adopt are animals that the City of Blytheville does not have to expend resources on.

We would have welcomed an opportunity to address the Animal Control Committee before publicly being accused of not caring for the animals or working hard to be partners with the community. We welcome anyone to visit our shelter between 1 p.m. and 5 p.m. daily. If you have questions, concerns, or would like to partner with us, please call Susie Langston at 870-623-2824.