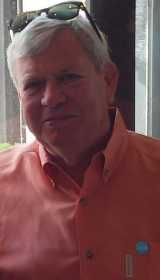 He was preceded in death by his parents, Harlyn Stevens Webb and Betty Baldridge Webb and one brother, Charles Nathan Webb.

Randy attended Blytheville High School and J. W. Moore School of Technology in Memphis, Tennessee. He enlisted in the United States Navy in 1970 and served a tour of duty in Greece.

He opened Fabrite Machine Shop in West Memphis where he worked until accepting a teaching position at West Memphis High School. In 1994, Randy joined Dr. Glen Fenter, a personal friend, to direct the physical plant at Mid-South Community College, a position he took great pride in until his death.

A true renaissance man, Randy excelled in many areas. He was an avid hunter and fisherman, as well as an expert carpenter, artist, and chef, the latter of which garnered many bragging rights for his Memphis In May cooking team, “Just Us Hogs.” He was a beloved husband, father, brother, grandfather, and friend, and he was a giver of himself and his time to anyone in need.

Visitation will be held from 10 a.m. until 11 a.m. Tuesday, May 9, 2017 at Roller-Citizens Funeral Home with funeral services following afterwards. Memorials may be made to the Randy Webb Memorial Scholarship at Arkansas State University Mid-South.