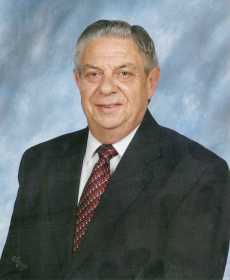 Murray Dewayne McHaffey, 75, of Blytheville passed from this life on Friday, April 22, 2016.

Dewayne was born to the late Isaac Murray and Willie Mildred Goff McHaffey, September 24, 1940, in Blytheville. He graduated from Burdette School and later received a B.S. degree in Accounting from Arkansas State University. He was the first McHaffey to receive a college degree, his greatest scholastic achievement. He met the love of his life, Donna Louise Moser, while attending ASU in September 1960. They later married on October 6, 1962. They were married for 40 years. Dewayne was a veteran of the U. S. Navy, serving his time in the early sixties in Florida and Texas. He was an Air Controller and Radar Operator.

While attending Vacation Bible School at New Liberty Baptist Church, around the age of 12, he was saved. He continued to champion for VBS for the children due to the impact on his life, later participating in VBS at Madison Baptist Church in Jackson, TN where they raised the family.

Dewayne said he would never regret his childhood as he felt he had the best one of anybody he knew. From chasing his sister, throwing rocks and laughing, until she climbed to the top of the chicken coop to escape; setting rabbit traps around the farm, checking them before daylight; playing with all the neighborhood children; swinging from the old oak tree on the farm; and fishing and hunting with his Daddy, he grew up with the greatest of memories.

Dewayne also liked to travel. He and Donna went to many places, including California, New Orleans, Cancun, and a cruise to the Bahamas. He was also a great cook, his favorite dessert was blackberry cobbler with ice cream, and loved to dress up and look sharp!

Dewayne is survived by his oldest daughter, Suzannah Edwards;

Son-in-law, Mark Bevill -- both of Blytheville;

Memorials may be directed to St. Jude Children's Research Hospital.