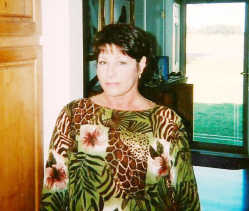 Born to William Lee and Orpha Mae Ostrum Darst in San Antonio, Texas, she was a Production Clerk at Nibco and of the Lutheran Faith.

Debbie's favorite pastime was shopping for Diamonds. It wasn't unusual for her to spend hours in a store searching for just the right one. She found that her grandchildren were the sparkling diamonds of her eye. She and her husband Ray loved to eat breakfast at the Waffle House. Being born and raised in a military family, she loved to travel. Like all families she enjoyed the hustle and bustle around the home until Dr. Phil, Jerry Springer, or the Steve Wilkos Show came on TV. Steve Wilkos was her favorite because he was so real. At this moment everything came to a halt and there were no interruptions allowed until the shows were over. Her and husband Ray also loved riding on their motorcycle when able to get away.

Debbie was preceded in death by her parents and brother, Gary Lee Darst.