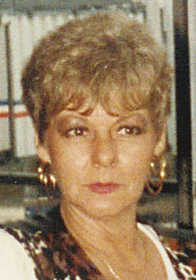 Mrs. Melva Nevada Thomas, 70, known to most as "Mel" or "Taz," of Blytheville, passed from this life Wednesday, Jan. 23, 2013 at St. Bernard's Regional Medical Center in Jonesboro after a long illness.

She was born in Rio Tinto, Nev., to Joseph Earl and Velma Nilene Hughes Peterson Sr. At an early age she moved to Tooele and Salt Lake City, Utah. She was baptized and raised in the Mormon faith, which included being inside the Mormon Temple in Salt Lake City with her parents.

After moving to Blytheville she transferred to the Methodist faith. On June 11, 1966, Mel flew with Wally Thomas in a Cessna 150 aircraft from Ogden, Utah, to Reno, Nev., where they got married.

She was manager for Tupperware prior to becoming a cosmetologist. After several years, she was forced to retire due to arthritis. Mel then worked for J.C. Penney, Holiday Inn, McCaughey Jewelry and Lowes until declining health forced her to retire. Along with her husband, Wally, they owned SAF-T Aero, Inc. of the Blytheville Municipal Airport.

Mel was very witty and loved to joke around. She had a strong Christian faith which did not falter during her long period of suffering. Mel had a special love of nature, birds, animals and children. She enjoyed gardening and would plant enough to feed the rabbits. She had numerous bird houses and bird feeders in her yard and installed "doggie" doors in her home's porch areas, so stray cats or dogs could find shelter, food and water when needed.

Mel was active in her church, Order of the Eastern Star, Girl Scouts, Rainbow Girls, Job's Daughters, DeMolay Boys and girls softball. The den in her home was full of children's tables and chairs, coloring books, puzzles, games, etc., and all the neighborhood children would congregate to watch TV, play games, eat and just hang out.

In addition to her parents, she was preceded in death by her sisters, Della Peterson Simonson and Jane Peterson Jensen; and brothers, Pete Peterson and Ed Peterson.

She is survived by her husband of 46 years, Wallace R. "Wally" Thomas, of the home;

Her special friends, Sharon Blount Prince and her husband, Derek, and their two boys of St. Augustine, Fla., and

A host of other relatives and friends.

Memorial services will be at 2 p.m. Saturday in Cobb Funeral Home Chapel with the Rev. Marilyn Webb officiating. The family will receive friends from 1 p.m. until service time. Blytheville Chapter No. 279, OES, will be in charge of the Eastern Star Service. An online register may be signed at cobbfuneralhome.com. In lieu of flowers the family requests memorial be made to your favorite charities.