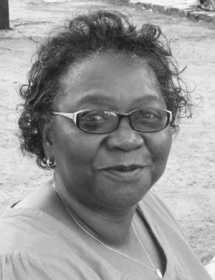 She was born in Blytheville, the daughter of Rosa Benson and J.P. Jones Sr. and reared by her mother, Rosa and step-father, Charlie Brooks. She was an honors graduate of Blytheville High School class of 1974 and attended Mississippi County Community College. She accepted Christ in 1965 and was a devoted and dedicated member of First Missionary Baptist Church serving as a teacher of the Mission Ministry, Sunday School, an usher and served as president of the Usher's Federation of the General Baptist District.

She was an employee of Safeway Stores, Borg-Warner, NibCo and Outlook Point. She enjoyed her many friends and on Fridays, Mrs. Lillian Pulliam, Ms. Janice and Aunt Eria spent time quilting.

She was preceded in death by her parents; two sisters, Robbie Soward Conley and Juanita Rogers; and two uncles, Isadore King and Henry Fletcher.

She leaves behind to cherish her memory, a husband, Charles White Sr. of St. Louis;

One nephew that she reared, Aaron Soward of Kileen, Texas;

Her mother-in-law, Mrs. Fannie Mitchell; and

Other relatives and friends.