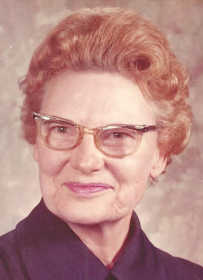 Born May 17, 1914, in Harrisburg, she was the daughter of the late Arthur and Eura Bolin Hamilton. She was a retired school teacher and public accountant who lived most of her life in Manila. She received her Bachelor of Science in Education degree from Arkansas State College in 1937 and her Masters of Arts degree from Memphis State University in 1956, graduating magna cum laude. Her teaching experience included McCrory High School and Arkansas State College in Jonesboro (business education). When she was employed by Arkansas State College to teach, she also acted as secretary to the President, Mr. V. C. Kays. She taught high school business courses at Manila and high school math at Cooter, Mo. She retired after having taught a total of 46 years.

During her teaching career she was active in various educational organizations. The American Council of Education, Washington, D. C. appointed her to serve as Consultant on the Committee of Accreditation of Service Experience. She was elected by her peers to serve as District Director of the Arkansas Business Education Association. The Arkansas State Department of Education appointed her to serve on the Arkansas Advisory Council on Secondary Education for a ten year term. She served on the Arkansas School Improvement Program and was a Consultant to the Commission on Accreditation of Service Experience, Washington, D.C. In 1956-57 she served as Secretary of the Mississippi County Teachers Association and served on the Governor's Advisory Council on Education.

During the six years Mrs. Bullard taught mathematics at Cooter High School she sponsored numerous mathematics projects that were entered in the Southeast Regional Science Fair held annually at the Southeast Missouri State University in Cape Girardeau, Mo. Winners went on to the Missouri Junior Academy of Science to the International Science and Engineering Fair held in St. Paul, Minn., and to the American Association for the Advancement of Science and the American Academy of Science held in Washington, D.C. She was a member of the NEA, AEA, ARTA, NRTA and the First United Methodist Church in Manila. In addition to her teaching career, Mrs. Bullard operated an accounting service for 35 years, retiring in 1988 at the age of 74.

One granddaughter, Jamie F. Bullard Alexander of Georgia; and

Visitation with the family will be from 6-8 p.m. today at the Howard Funeral Service Chapel in Manila. Graveside service with immediate family members will be at 10 a.m. Friday at Harrisburg Memorial Park. In lieu of flowers, the family has asked friends to consider memorials to the First United Methodist Church, P. O. Box 1367, Manila, AR 72442. The family would like to thank the Lonoke Nursing Home for their care and support, and the Arkansas Hospice Care Center in Little Rock. A guest register is available at www.HowardFuneralService.com