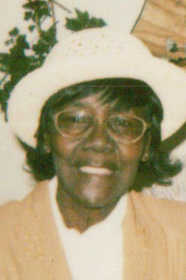 Mrs. Willie Mae Real, 86, of Rockford, Ill., formerly of Steele, departed this earthly life Saturday, May 28, 2011, at Rockford Memorial Hospital, after a short illness. She was born Sept. 11, 1924, in Frenchman Bayou, the daughter of Jack and Addie Barner. Willie Mae moved to Rockford in 1997. She married Aaron Cooper Sr. and to this union seven children were born. After his passing she married Alfonzy Real in October 1952; to this union three children were born. He preceded her in death, as did her parents; her sons James Cooper, Sam Real, J.P. Real and Pete Real; her daughters, Joann Real, Lorine and Corine Cooper and Pat Real; and four sisters, Irene Barner, Alene McWright, Mae Lee Hodges and Ivory Wilkins.

Mrs. Real was a member of Mount Sinai Baptist Church, serving as a mother.

She leaves to cherish many loving memories her sons, Aaron (and Nettie) Cooper, Melvin (and Geraldine) Willett and Henry Real;

A daughter-in-law, Louise Real of Blytheville;

A host of other relatives and friends.